How to Use Responsive Search Ads (RSAs) New Features

It’s no secret that Responsive Search Ads have improved over time as Google has added numerous features and upgrades.

That said, we still speak with many advertisers that complain about low conversion rates and RSAs stealing impressions from their “better performing” Expanded Text Ads (ETAs). So what’s going on exactly?

There’s still a misunderstanding of the purpose of RSAs. RSAs are intended to capture more ad impressions and improve the relevance between fringe search queries and creative copy. To put it plainly, RSAs improve the performance of keywords and related search queries that are higher up the funnel. When your ad group includes a lot of broad-match keywords and a negative strategy that’s not well defined, your RSAs are probably going to see a lot more impressions than your ETAs. And yes, those lower-quality impressions will probably lead to lower CTRs and lower conversion rates. But that doesn’t mean RSAs aren’t doing their job.

In this article, I’m going to discuss the major features that have been added to RSAs since their launch way back in May of 2018. And, I’m going to pay particular attention to the major new features that just launched in July 2020. In addition, I’ll provide recommendations for when and how to implement said features.

Google has made many announced and unannounced updates to streamline RSA creation and optimization. When RSAs launched we were pretty much up to our own devices when it came to creative direction. Nowadays when you create a new RSA, Google populates your ad for you based on copy from other ads in the ad group, campaign, account as well as copy from your landing page. A little light editing and your new ad is ready in a minute or two.

The ad creation tool is comprehensive now and includes the ad group name, a preview list of keywords, number of ads and types in the group, as well as the ad strength widget.

The ad strength widget has improved too. Clicking on “view ideas” provides you with ready-made copy to add as well as a descriptive guide for additional copywriting ideas.

Google has also integrated RSA copy ideas into its recommendations tool. The tool recommends adding snippets to existing RSAs as well as general recommendations to add RSAs to ad groups without them. Recommended snippets are hit and miss at this point. We often see copy recommendations that don’t apply to the specific service on offer. For example, we might have a client the serves two distinct regions. Google will recommend including location names from the region that doesn’t belong to that campaign. I expect this problem will go away in time.

When RSAs initially launched, there was no way to assess the performance of individual ad copy snippets (assets) or ad copy combinations. Google remedied that by adding impressions reporting for each snippet as well as for combinations.

Individual assets are reported in a list format and include the copy, asset type, position pinning, performance, and impressions. From here you can get a pretty good idea of which ad copy variations are being served most frequently. Keep in mind that pinned assets will always show so you can’t compare those to unpinned assets.

The combinations report is a little more useful for most advertisers. It displays complete ad combinations and the total impressions for each. Reviewing these can help you improve your ETAs as it’s a simple matter to create an ETA based on your best performing RSA combination.

Granted, it would be nice to have access to more KPIs such as clicks and CTR, but with so many combinations those numbers would be really low for many advertisers.

Google has just released an update to support cross-campaign asset reporting. Instead of seeing how assets are performing in a single RSA, you can now see individual asset performance across an entire account. The display is similar to standard asset reporting but the performance section has been expanded to show the percentage of ads hitting different performance levels (best, good, low, learning, and unrated). With this tool, you can now see which assets are performing consistently well at scale.

RSAs do now fully support keyword insertion, so go ahead and do so if you wish. That said, I don’t believe there are many good use cases to use that feature which has depreciated in value over the years. In particular, if you’re trying to run Google Ads at scale, you need to be thinking beyond exclusively using exact and phrase match keywords in your ad groups.

The location extension insertion tool allows you to insert the city, state, or country in your ads. The location shown will be based on where the user is or their area of interest. Presumably, this means the former by default unless the user has included a location name in their search query.

This tool should be very powerful for advertisers where localization is important. If you provide home services or have multiple physical stores implementing this needs to go to the top of your priority list. 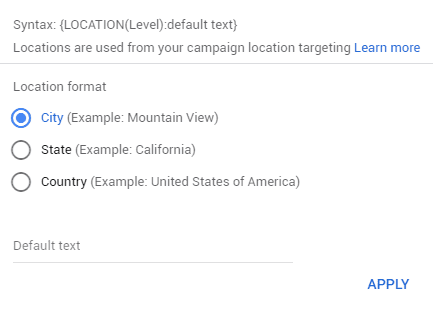 Interestingly, this tool is not yet, and may never be, available for ETAs, making RSAs more attractive for local advertisers.

Google has brought the countdown customizer tool over from ETAs. The tool works exactly the same way in RSAs, allowing you to set a countdown timer for an event such as a sale. Providing a countdown is a great way to create scarcity and usually leads to a boost in CTR and conversion rates.

If your business offers limited-time sales this is something you should already be using in addition to promotion extensions.

Responsive Search Ads have come a long way in a short time. If you’re not taking advantage of RSAs you’re really missing out, particularly if you’re trying to scale. As with all creatives, always follow best-practices and you’ll see an uptick in performance. You might also want to refer to our original How to Implement Google’s Responsive Search Ads article for more tips and strategies.