Should You Switch to Broad Match Keywords?

For some time now, Google has been recommending that most advertisers switch their accounts to 100% broad match keywords.

In this post, I’ll explore why they are doing that and whether or not you should drink this particular Kool-Aid.

How did we get here?

Google has a long-term plan for their Google Ads users. While I don’t have inside information it’s obvious to me that Google wants to exert more control over campaigns. Importantly, the reasons for this aren’t entirely selfish. They very much want their advertisers to be successful. And what will successful advertisers do, you ask? Yep, spend more ad dollars. 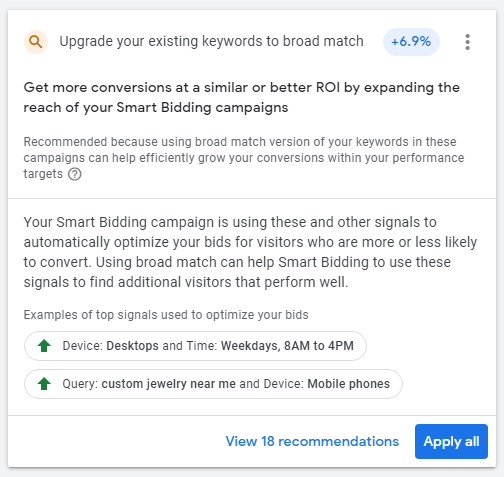 At the same time, Google wants to build a system that’s so easy to use that small businesses don’t have to pay somebody else to manage it. In this context “somebody else” is any Google Ads expert such as an agency, freelancer, or in-house specialist.

Lastly, Google wants to hide all the data. This is partially in the name of privacy, but also so that advertisers can’t see where they are wasting money.

The Current State of Bidding and Keywords

In 2019 Google started a huge push towards Smart Bidding. This included improving the technology, convincing users to implement it, and making alternative bidding harder to use. And Google has been largely successful. Any PPC expert will tell you nowadays that Smart bidding almost always wins on performance. Likewise, they will tell you that maintaining manual bids is a huge undertaking. And, that most advertisers now use Smart Bidding.

And while this was going on, Google has been systematically degrading our ability to choose which search queries to show our ads for. Here’s a grocery list of keyword changes that have occurred over the past few years.

It’s true that Google has recently scaled back a bit on blocking queries in search campaigns, but that may only be so that more users will implement broad-match keywords.

The upshot is that we’ve already lost most of our control over keywords. And what’s left we’re hanging onto by our fingernails.

Does the Combination of Broad Match and Smart Bidding Work?

In a word, yes. But it’s complicated.

Google’s AI bids on search queries not keywords. As such, it can learn which queries and similar terms are most valuable and ignore, or at least bid lower for others. This is particularly powerful in large complex ad accounts with loads of campaigns, ad groups, keywords, impressions, clicks, and conversions. But it can also work well for small accounts too. Google pretty much understands what you’re offering and can leverage existing search query performance from hundreds or even thousands of similar advertisers.

But there are issues.

AI needs to experiment to learn. And, while it’s learning it’s spending money on search queries that a smart human operator would never do. While this is going on an advertiser may look at search query history and be absolutely flabbergasted by some of the searches ads are running for. That often stops the broad match experiment cold.

Also, Google will typically start spending 90%+ of the entire campaign budget on a single broad match keyword. Any kind of keyword analysis you planned on doing is pretty much kaput.

And there are times when Google just can’t figure out what it is you’re trying to sell and runs ads for irrelevant queries no matter how many negatives you add to the campaign.

Are You Likely to Benefit from an all Broad Strategy?

If you’re easily spending your fixed budget with no broad keywords, you probably won’t see better performance from going broad. Instead, you’re likely just going to spend a ton of time clearing out junk queries with negatives to get your campaign performance back to where it was before the change.

Likewise, if you generate fewer than 250 conversions per month, you are unlikely to benefit from an all-broad match strategy. While performance may eventually improve back to your current level, that could take months or more. And you’ll lose so much control for no good reason, it’s simply not worth it.

Where we’ve seen broad match work well, is for advertisers looking to scale up.

Here are a few scenarios where it works well:

Hitting CPA or ROAS targets and not filling budget

While you can try adding additional phrase or exact-match keywords to your campaign, that will typically only generate a small amount of growth. Switching to broad will really shake things up. You will see a big increase in impressions, clicks, and hopefully conversions while spending your entire budget in most cases.

If you’re not sensitive to short-term CPA or ROAS numbers, switching to broad match is a fast track to spending more money and driving more conversion volume. Plan on spending a substantial amount of time clearing bad queries for at least a few months. After that, you should start to see Google being a bit smarter about what it’s bidding on. You should also see the conversion numbers improve moderately to significantly.

How to Test Broad Match Keywords?

One way is to accept Google’s recommendation to switch everything to broad match, then watch and wait. You’ll need to give it several weeks before assessing performance. And, if you have a small budget and/or lower volume of conversions, you may need to wait quite a bit longer than that. Also, anybody in advertising will tell you that serial testing is fraught with problems since market conditions are constantly changing. The upshot is this method for testing/implementing broad match keywords is really bad.

As such, Google has received a lot of pushback from advertisers who are rightly concerned about campaigns going off the rails by making the big switch. In response to this, Google has recently rolled out an experiment that lets you compare your current keyword strategy to an all-broad one. This is a much fairer method to compare broad match vs. whatever combination you currently run. If you’re planning on taking the plunge I strongly recommend this option. However, this creates a new problem. Since you’re split testing you may need run this experiment for a few months before confirming the results. That’s a long time for any advertiser to play around with their typically vital Google Ads account.

There is another option, and it’s how we mostly do it at my agency. Slowly introduce broad match keywords a few at a time while keeping a close eye on search queries related to those. Over time you can not only scale up but also identify additional phrase/exact match keywords to add back into your account – old school “conquesting” style. And, importantly, you can stem the volume of low-quality queries with negatives as you go.

The great thing about his method is that you can end up with all broad keywords, just a few broad keywords, or anywhere in between. This makes the technique suitable for almost any account size.

Broad match keywords are not evil, but you can easily get into trouble blindly accepting Google’s recommendation to switch 100% with a button press. Consider your situation carefully, paying close attention to current performance characteristics, budget, and your tolerance for trading off efficiency for growth.

Instead of making the one-time change, consider running an experiment to split test broad against your current keyword strategy. Or, do like we do at my agency and roll out broad keywords a few at a time for a slow controllable growth rate.